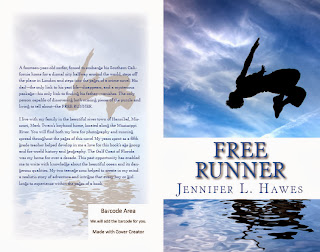 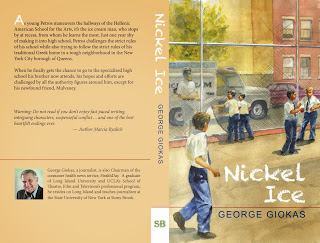 Free Runner
by
Jennifer L. Hawes
A fourteen-year-old surfer, forced to exchange his Southern California home for a dismal city halfway around the world, steps off the plane in London and steps into the pages of a crime novel. His dad—the only link to his past life—disappears, and a mysterious package—his only link to finding his father—vanishes. The only person capable of discovering both missing pieces of the puzzle and living to tell about is the FREE RUNNER.

Nickel Ice
by
George Giokas
As young Petros maneuvers the hallways of the Hellenic American School for the Arts, it’s the ice cream man, who stops by at recess, from whom he learns the most. Just one year shy of making it into high school, Petros challenges the strict rules of his school while also trying to follow the strict rules of his traditional Greek home in a tough neighborhood in the New York City borough of Queens.
When he finally gets the chance to go to the specialized high school his brother now attends, his hopes and efforts are challenged by all the authority figures around him, except for his newfound friend, Mulvaney.
Posted by mjnickum at 9:50 AM No comments:


Saguaro Books, LLC is a startup publishing company specializing in middle grade and young adult fiction by first time authors. Only work by first time (previously unpublished) authors will be considered for publication. We are a print-on-demand publisher. We are not a vanity press. We adhere to strict editorial and publishing standards. We utilize the newest publishing technology available. Visit www.saguarobooks.com.
Posted by mjnickum at 11:50 AM No comments:

15 Grammar Goofs That Make You Look Silly [Infographic] | The Web Writer Spotlight
Posted by mjnickum at 7:45 AM No comments:


All of the Saguaro Books inventory will be available at the Apple iBooks Store before Christmas! We publish only high quality young adult and middle grade fiction.
Posted by mjnickum at 10:37 AM No comments:

We'll have a table and be selling books at the Arizona Library Association Annual Meeting at Fort McDowell, Arizona on Nov. 14, 15.
Posted by mjnickum at 7:29 PM No comments:

Saguaro Books publishes fine middle grade and young adult fiction.
Available from Amazon, Barnes and Noble and www.saguarobooks.com in print and ebook
Posted by mjnickum at 12:26 PM No comments:

What is Saguaro Books?

Saguaro Books, LLC publishes middle grade and young adult fiction written by first time authors. Only work by first time authors will be considered for publication, with one exception. Subsequent editions of a formerly published work will be considered if the first edition is no longer available and if the publisher of the first edition is no longer in business. The author must be able to show that he/she has all rights to publish further editions of the title. This exception will be considered on a case by case basis, no precedent will be set.

We are a print-on-demand publisher. We are not a vanity press. We adhere to strict editorial and publishing standards. We utilize the newest publishing technology available.
Mary J. Nickum is the Editor-in-Chief of  Saguaro Books, LLC. Ms. Nickum earned a B.A. degree in English Education at Northland College, Ashland, Wisconsin, a Masters in Librarianship at the University of Washington, Seattle, Washington and a Masters in Interdisciplinary Studies from Oregon State University, Corvallis, Oregon. She is a member of the Society for Children's Book Writers and Illustrators (SCBWI), the Association of Independent Authors (AIA) and Outdoor Writers Association of America (OWAA).See more about the Editor-in-Chief at www.marynickum.com.

Please note:
No agents, please. We prefer to work directly with authors.

Posted by mjnickum at 8:57 AM No comments:

Posted by mjnickum at 9:01 AM No comments:

How to Write an Epilogue: 6 steps - wikiHow

How to Write an Epilogue: 6 steps - wikiHow
Posted by mjnickum at 1:16 PM No comments:

Author and Book Buzz: Author Interview with Erik Daniel Shein and L.M. R...: ***** Goodreads 5-Star Review *****  The MonsterJunkies is a story about a boy named Crow and his sister Indigo who try to approach bullyi...
Posted by mjnickum at 7:22 AM No comments:


Bullying is a topic of interest to most, if not all tweens and teens now. From kindergarten to college, kids have encountered it. Bullying can range from teasing among the younger set to activity considered criminal as the children grow older. Consider the events covered by the news agencies over the last decade. Sometimes the bullied become the bullies, as in the Columbine killings in Colorado. Or the activity can take on the mode of a hate crime as in the Laramie, Wyoming torture and killing of Mathew Shepard. Robert Champion, a Florida A & M band member died as a result of hazing, once a tradition among college sororities and fraternities, which rarely resulted in mortality. These examples, combined with the recent displays of gun violence, have put students and school administrators on edge. The President is being urged “to do something;” LaPierre of the NRA is advocating arming teachers. Where will it stop?

I believe the place to begin is in the schools. Let’s stop bullying now. The bullies need psychological treatment. They have a personality defect, perhaps something in their family situation has caused them to think they are better than others or that they a have superior right, often without the ability, to lead. Erik Shein, noted author and animator, has produced a work of fiction, The Monsterjunkies; an American Family Odyssey,  for tweens and teens that provides a look inside a family who struggles with inheritance, science and a community’s fear of the unknown. Bullying and how one tween defeats the bullies will provide entertainment while giving kids information about bullying. “Ed asked, ‘Do you believe their story, Ms. Conners? You heard my speech on bullying at the PTA meeting and you know how the bullying game is played. They are using the very tactics I described, including taunting, secret backstabbing and provoking victims when the moment’s right. It’s all part of the game and that is exactly what’s happening here.’”

Kids will recognize at least one character from The Monsterjunkies; an American Family Odyssey, whether it’s the main character, much maligned Cromwell, his sister  the well-arranged Indigo or the bully-master himself, Rutherford J. Grimes III. Cromwell or Crow, as he prefers to be called, finds a way to deal with the bullying. He meets it head-on in a unique combination of smarts and one-upmanship. Indigo, too, must find a way to have friends over without sacrificing her family’s desire and need for privacy. Why the overly espoused need for privacy? It is the very estate itself and its unusual set of inhabitants that provides the ticket for Crow’s acceptance.

Some students may be able find solutions to their bullying problems at home, talking to family; perhaps, a family member has experienced bullying in his or her younger years. Or there may be some other suggestion that can provide material for a solution. School counselors are also a good avenue for help. Students who experience bullying at any level should contact school counselors and/or administrators immediately. It is their desire to end bullying as much as the students. They must be given a chance to help and that chance begins by being notified.